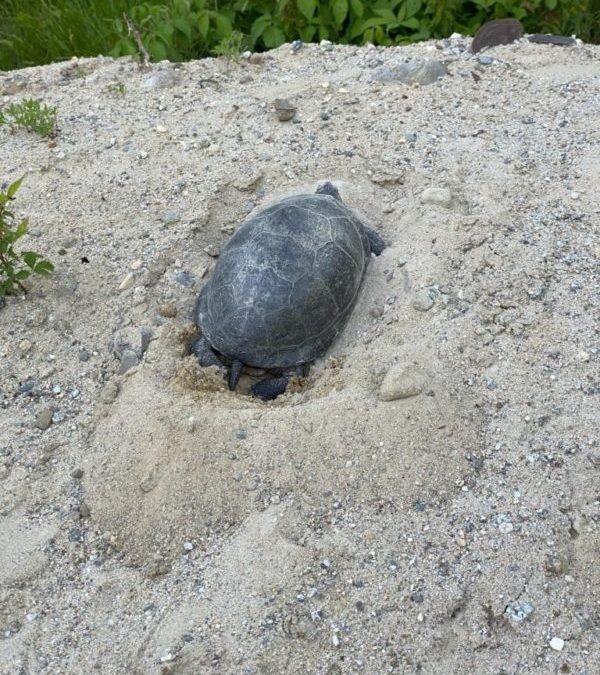 Nearly three years ago, Great Bay Stewards board member Laura Byergo came to the group with a challenge.  She had been pledged up to $5000 in matching funds toward the rehabilitation of Blanding’s turtle nesting sites. The Stewards rose to the task, obtaining donations from the Lamprey River Advisory Council, the Greenland Women’s Club, board members, crowdfunding, and Stewards members.

Today, through the hard work of multiple partners, new nesting sites have been created in the Seacoast region and the turtles have begun to arrive.

In New Hampshire, four of our seven native turtles are listed as a Species in Greatest Need of Conservation in the N.H. Wildlife Action Plan. Two of these species, Blanding’s turtle and spotted turtle, are also protected under the N.H. Endangered Wildlife Conservation Act. Unfortunately, Blanding’s turtles favor vegetated wetlands, vernal pools, and slow-moving rivers, and require large landscapes with minimal development and few roads. The turtles look for nesting sites with coarser grain soil that won’t get too wet for their eggs. Continued development and road construction often cuts turtles off from their water or nesting sites; New Hampshire turtles also face threats from predators such as skunks and raccoons.

Scientists used GIS mapping to identify potential sites for turtle nesting. “We chose the three areas based on information we gathered from radio tracking gravid females, identifying the highest density areas, and away from roads and residential development,” says Joshua Megyesy, a wildlife biologist with the N.H. Fish & Game Nongame and Endangered Wildlife Program.

“We wanted to create nesting sites in more protected areas,” says Rachel Stevens, Stewardship Coordinator at the Great Bay National Estuarine Research Reserve.  Ultimately, the scientists identified three areas around the Crommet Creek watershed.  “The Reserve and its conservation partners are lucky to have permanently conserved about half of the 2,500 acre Crommet Creek Conservation Area in Durham and Newmarket,” she says. “This is the largest block of natural lands in the Great Bay region. It is comprised of Appalachian Oak Pine forest and a network of freshwater wetlands that support many species of wildlife including active heron rookeries, nesting Great Horned owls, and spotted and Blanding’s turtles.”

In late spring, Stevens was thrilled to report to the Stewards that Blanding’s had been spotted at the new nesting sites.  It was an impressive accomplishment for the first year, and the first female to arrive was a large, long-lived one.  For now, game cameras remain on the nesting site, and scientists look forward to future discoveries.

“One thing we will continue to monitor closely is the rate of nest predation, particularly from raccoons,” says Megyesy. “Long-term, we plan to resample the population every five years to detect trends in demographics. What we are hoping we will see in an increase in juvenile recruitment in the population from the creation of available nesting habitat.”

While the Stewards were thrilled to help with funding this successful project, we were just one of many partners. The Reserve purchased the land the sites were created on through the Great Bay Resource Protection Partnership and National Oceanic Atmospheric Administration funding. Fish and Game’s Wildlife Department coordinated the timber harvest that created small openings within the forest that allows sunlight to warm the gravel areas, while additional funding for the timber harvest was provided by a U.S. Fish and Wildlife Service New England Field Office grant.