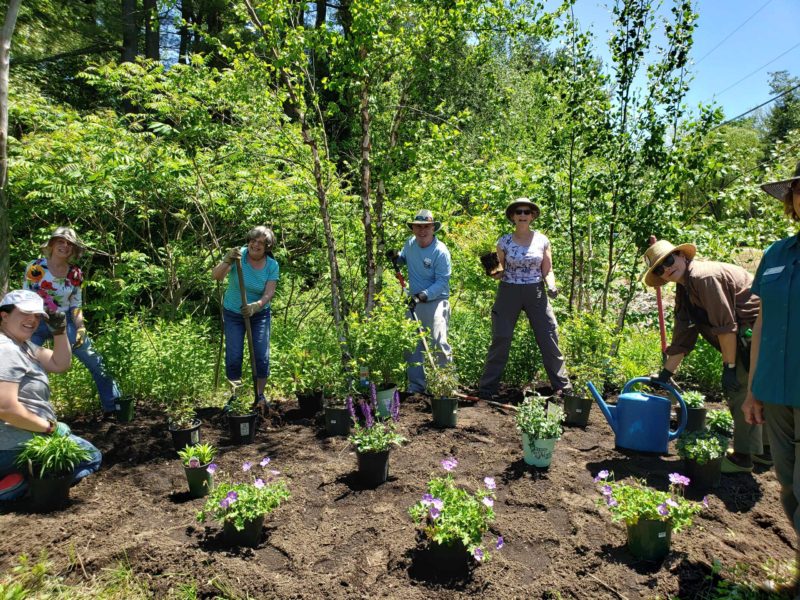 On a sunny Friday in early June, drivers on College Avenue headed toward Newmarket might have wondered at the gathering going on at Chapman’s Landing on the Squamscott River.  Master Gardeners Marcy Stanton and Ruth Droscher, alongside Great Bay National Estuarine Research Reserve Stewardship Coordinator Rachel Stevens and Education Coordinator Kelle Loughlin, were leading participants in a workshop on gardening for pollinators.

The event was held at Great Bay’s Community Wildlife Garden, a property that is managed by N.H. Fish and Game as part of the Great Bay National Estuarine Research Reserve. Stevens started the workshop with a tour of the 1.6-acre garden, which she said has been a community effort since its inception: companies and groups such as Timberland, Eversource, and the University of New Hampshire Thompson School of Applied Science have each played a role in bringing it to life. “It’s all very collaborative,” says Stevens.

A wooden structure in the center of the garden is a replica of Thoreau’s home, while the trail leads out to a viewing platform overlooking the water and an osprey nest. Stevens said the Department of Transportation estimates that there are 12,000 car passes a day, but many people don’t even know it is there.

During the three-hour workshop, participants learned the basics of attracting pollinators to their gardens through choosing appropriate species, as well as how to make a water feature for butterflies. They also went home with a collection of perennials to begin their own pollinator gardens and a book on gardening for butterflies and bees.

Loughlin noted that participants are part of something happening nationally around the Reserve System called Conservation Action Education. CAE workshops are intended to teach participants about a particular environmental topic, such as invasive species, climate change, or in this case the importance of pollinators to a heathy ecosystem. Participants are then asked to assist in a hands-on way, and then to go back home and continue using and sharing the skills or knowledge they obtained at the workshops.

The workshop was made possible by funds from the New England Grassroots Environment Fund Grow Grant. “We were thrilled to be able to put on this workshop, and grateful their Grow Grant made it possible,” says Allison Knab, executive director of the non-profit Great Bay Stewards. “This was a wonderful opportunity for members of the community to learn about easy decisions they can make for the health of the environment.”

The Stewards also recently received a donation from The Fabulous Find that will go toward completion of the garden, including signage and a solar water pump.