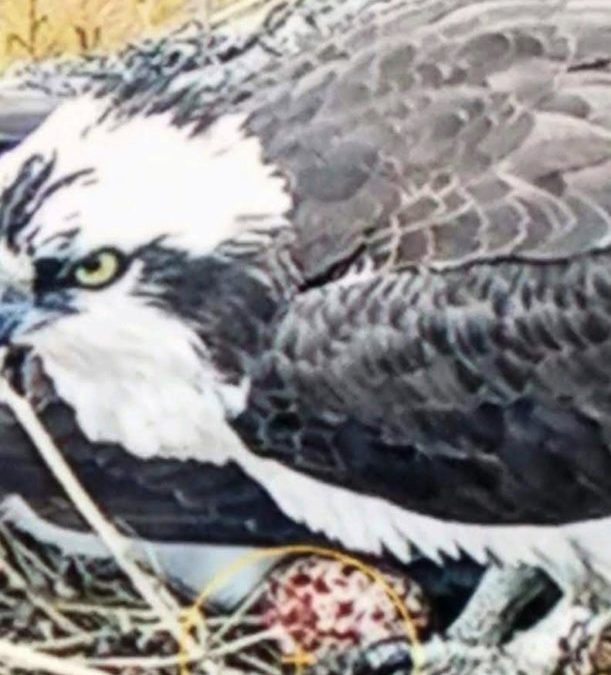 Can you tell me about osprey? What do they osprey eat, how can someone identify an osprey and how long does an osprey live?

Osprey are a unique bird of prey because they feed almost exclusively on fish. Because of this adaptation, they live and nest close to the water, relying heavily on clean water with healthy fish populations to eat. The osprey nesting in front of the Great Bay Discovery Center have been eating a variety of fish, including sunfish, American shad, winter flounder, black crappie, Atlantic tomcod, fallfish and white perch, which are all available in and around the Great Bay. When these fish return to the estuary during spring migration, the osprey will be close behind.

When trying to identify an osprey, look at their wingspan and look for an “M” shape when observed from below. An eagle or turkey vulture, for example, has a straight wingspan. Additionally, osprey have a white breast, and have some white on the head as well as a black beak. An adult osprey wingspan can approach 6 feet across! Osprey can live for two decades or more in the wild.

Are there any threats to osprey, other than natural predators?

The osprey population was extremely low worldwide prior to the passage of the Clean Water Act in 1972 because of the chemical DDT. DDT is a pesticide sprayed on crops to kill insects. When it rained, the DDT would wash into the water and biomagnification would occur (the process by which DDT increases its concentration in the tissues of organisms as it travels up the food chain). Osprey, which are almost exclusively fish eaters, ingested the fish contaminated by DDT and it inhibited the production of calcium, which in turn made the shells of their eggs very weak.

Thankfully, since 1972 the population of osprey has rebounded and is no longer in jeopardy. In the Great Bay, the populations have steadily increased over the last two decades.

What is typical habitat for osprey and what makes Great Bay such a special place for nesting pairs?

Great Bay is a wonderful hunting ground for osprey, containing a wide variety of fish for them to hunt and eat. The osprey also fish in swamps and rivers … they seem to have a sophisticated palate and enjoy both salt water and fresh water fish!

Are ospreys commonly found in the eastern United States? Are they endangered?

Osprey were once listed as threatened in New Hampshire but no longer have that designation. They are still protected, like all raptors.

We can see that a pair of osprey has inhabited the nesting platform at the Great Bay Discovery Center. Is this the same pair as in prior years?

Osprey tend to show fidelity to their nesting site, not necessarily to each other. If one of the adult pair doesn’t return, another osprey may take its place. The male will call to a female to attract her, using food as an enticement. We do not know if this is the same pair that has nested previously at the Great Bay Discovery Center, but now that we have the osprey cam, we are hoping to be able to track this information going forward.

The osprey that return will rebuild a nest onto what is left after the winter months. If necessary, and the platform is empty, they will start building a completely new nest. Great Bay does not have an abundance of natural nesting spots. As a result, a few local organizations, including the Great Bay National Estuarine Research Reserve, have built man-made platforms for osprey to nest on.

How do osprey build a nest?

Both the male and female will fly the shoreline and edges of upland forests picking up sticks from the marsh, and breaking off small branches from trees. Osprey also pick up rope and discarded marine debris, peat, seaweed, and other items found along shorelines. Both the male and female will build the nest together. The pair will continue to build a suitable nest, using both hard and soft materials, right up until the female is ready to lay her eggs.

How many eggs are laid by the female? Who takes care of the eggs and then the chicks once they are hatched?

Typically, the female lays 2 to 4 eggs a day or two apart. The female osprey at the Great Bay Discovery Center laid her first egg on May 1st. The female will do the majority of the incubating, but periodically the male will allow her to fly in an “incubation exchange”. During this time, the male will incubate the eggs, which are rarely left unattended. Eagles, owls, and mammals that can climb trees are all predators interested in eating the eggs.

Once the eggs are hatched, about 5 to 6 weeks after they are laid, the female is the primary care-giver, spending all of her time protecting the baby chicks from sun, rain, and predators. The male osprey will hunt for fish, takes his share and then bring the remainder to the female osprey who will then tear the fish into pieces and feed the baby chicks. She will feed herself as well.

How long do the chicks live in the nest? How do they learn how to fly?

What happens in the autumn? Do all the ospreys, both the parents and the chicks, leave the nest? Where do they go?

New England-based osprey tend to migrate south. We do not tag the osprey that are nesting at the GBDC, so we do not know precisely where they winter. The osprey will start to return at the end of March.

What a thrill it must be to have a live “Osprey Cam” at the Great Bay Discovery Center in Greenland. Will the osprey cam be live year round? Do you expect to have a live video feed available online?

It is a thrill! We have had visitors tell us it is the best thing that the Discovery Center has ever done. There are several visitors who come regularly to watch the birds. Visitors can walk along the boardwalk and use binoculars to view the osprey nest. Then they can come inside and see an up close view through the osprey cam displayed on a wide-screen television.

For now, the camera will be running 24/7 in the center and visitors are welcome inside the Great Bay Discovery Center Wednesday through Sunday, 10am – 4pm. The boardwalk is open year round. The osprey will migrate south in the fall, but the camera will still be running. Who knows what we might see at that point! We are still working out the bugs in live streaming, but there are many interesting clips on YouTube of our nest. Check out “Great Bay Discovery Center Osprey Cam”. We are hoping that the osprey cam will soon be live streaming, so you can watch the osprey chicks progress from the comfort of your own home. We also have infrared capabilities for nighttime viewing and sound.

Kelle, I understand that you love birds. Do you have a favorite?

My favorite bird is the mourning dove. I love the sound and find it very calming. What also fascinates me about birds, from the indigo bunting to the scarlet tanager, is that even in New England, we have such colorful birds!

I know many people have been involved in bringing the osprey platform and osprey cam to fruition. Tell us about that.

The camera was made possible by a generous anonymous donation as well as support from Eversource and we are very fortunate to have crackerjack tree climbers from Urban Tree Company. Also many thanks to the Great Bay Stewards and their role in making the project possible as well as to the enthusiasm of our volunteers who help interpret this amazing bird to our visitors and students.