Reflections on the Bay with Joe Stieglitz 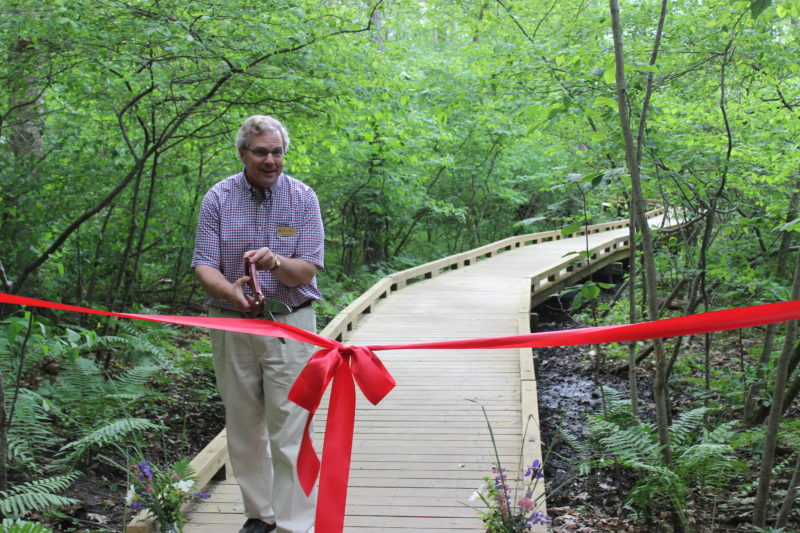 Joe at the opening of the rebuilt boardwalk in 2016.

Joe Stieglitz is a former Stewards board member, secretary, and chair; longtime education volunteer with the Reserve; and alongside his wife Pam was a major supporter of the rebuilding of the boardwalk.  He can still be found handing out chowder at the Great Bay 5K or serving tea during Art of Great Bay.  Joe’s memories over more than two decades as a Steward include the group’s origins, the launch of the Discovery Center store, and one small mishap involving cheese curds:

“I was among a small group that witnessed the creation of the Great Bay Stewards,” he says. “Some key people from Wells Reserve came to walk us through the necessary steps. When Jane Jette went to Florida, I took the minutes in her place.

I had taken the UNH Marine Docent course under Sharon Meeker and decided to lead student groups at Great Bay. I had tried teaching rocky shore groups at Odiorne Point during the training. Great Bay was closer to where I was living and I really liked Betsy Stevens, education director at GBDC.

Betsy encouraged me and Jeannie Meggison to repurpose a storage closet to become the Discovery Store. Our first season we had tee shirts and sweatshirts in three colors. Nothing else. I attended gift shows in Boston and Portland along with Peggy Mullin, Laura and Peter Flynn, and Joanne Bohn to order merchandise and expand the product lines in the store.

A funny moment that happened at a recent Great Bay 5K involved fish chowder that we were going to serve the runners in the food tent. As we were preparing the finish line food the day before the race, it was discovered that the containers that were designated “fish chowder” contained cheese curds!  We did serve the cheese curds (no whey) with toothpicks and laughed about the situation (afterwards)!

My wife Pam and I were able to hand Cory Riley a check for $20,000 to begin the fundraising effort to build the new boardwalk. [It was] definitely my proudest moment as a Great Bay Steward and volunteer educator.

I have benefitted in many ways from GBS and GBDC. I have met and worked with amazing staff, made lifelong friends with the volunteer educators, and led countless groups of children through the natural and cultural history programs in the spring and fall. The Great Bay Stewards taught me the importance of ‘friends groups,’ how hard work and planning can reap rewards to benefit the Reserve and ultimately Great Bay itself.”