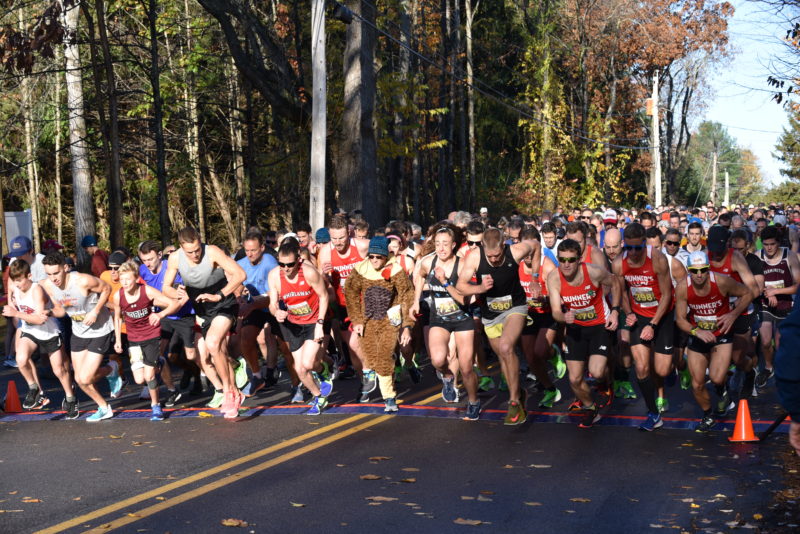 With blue skies and temperatures pushing 60 degrees, the 21st annual Great Bay 5K | Race for a Health Estuary included two new course records as well as a sweep of the team competitions.

Martin, a full time professional cross-country ski racer for the Craftsbury Green Racing Project, said it was his first time running the Great Bay 5K.  “My own race went well, but I also enjoyed the environment and how well everything was setup and organized,” he says.  “I ended up feeling great and the weather was beautiful which allowed me to run a time that I am very happy with.”

“Given that I was coming off of marathon training I wasn’t sure if I would be able to break [the record], but I was excited to give it a try,” says Schilkowsky. “After coming through the mile in 5:10, I was pretty sure I could get the record as long as I didn’t die too much. I did slow down considerably over the next two miles (5:19 and 5:24), but I held on long enough to sneak under the record which was exciting. All in all, I had a great time at the race. I absolutely plan on coming back next to year to try and break the all-time race record of 16:25!”

“We were thrilled with the weather, the turnout, and seeing so many runners hit their personal records,” says Bob Kennedy, race director. “Of course, this event would not be possible without the dozens of volunteers who help every year on everything from providing food for the finish to directing parking to checking in more than 700 runners and walkers. We are also especially grateful to the staff of the Great Bay National Estuarine Research Reserve for all they do to make the event a success.”

This year saw the launch of the team competition, which was swept by the very competitive team from Runner’s Alley.  Their team won the male and female prizes as well as the New England Oyster Cup for a mixed team of at least three men and three women.  Their winning Oyster Cup team included Christopher Dunn, Chris Ritchie, Vojta Ripa, Corey Dowe, Lindsay Weigel, and Katherine Cross-Powers.

The Great Bay 5K is a major fundraiser for the Great Bay Stewards, having brought in more than $200,000 since its launch. As always, the race provided prizes across five-year age divisions through age 100, a costume contest, great food, a free kids ‘fun run’ held after the race, and complimentary beer, hard cider, and oysters for participants who visit supporting breweries and restaurants the weekend of the race.

Please visit Granite State Race Services for more results, as well as a video of the finish!